The contest runs between Bucharest and Snagov through forests and dirt roads for a distance of approximately 55km.

This will go through areas of old forests of Vlasiei, pajisti, fields, lakes, villages and historical sites, arrival being on Lake Snagov.

The route is very affordable but we recommend training – at least 2 outputs longer on rough terrain (forest roads, of camp …) The trail is marked and you can train him or on different portions. Like every year Nomad Multisport Club will hold a recognition of the route that can be used for training and socialization.

Last year attended 2140 people in 18 countries, between 5 one 72 years the biggest marathon of its kind in the country and on this occasion in Eastern Europe.

The event has a cross component. Together with municipalities and volunteers as we can we clean waste from forests covered.

First Escape Route 2013 will have approximately the same route as in 2012 (GPS version is exported to here), jpg image details is below .

The final route for the year 2013 can be downloaded using the instructions below:

– The start will be in the same place that is in Police Academy parking Baneasa and rarefaction squad will begin with o bucla de 3 km wide and paved road.
The first part of 1.3km of Nightingale's 3 gasoline you go fi total inchis, the second part on the Vad Moldova Zoo has 2 bands and the same will be closed and returned to the initial entry has little more than a band.

– It was a new path more beautiful and faster in Baneasa forest road with mixed foliage as an alternative to reinforced.

– The belt will not run on the road in the path of the left opposite but parallel with the road.

The map below contains some of the CPs (checkpoint), approximate time in which participants go.
Spectators, family and friends can wait in some areas where intersections with public roads: Start, CP1, CP3, CP4, CP5, CP6, CP 7, Finish. 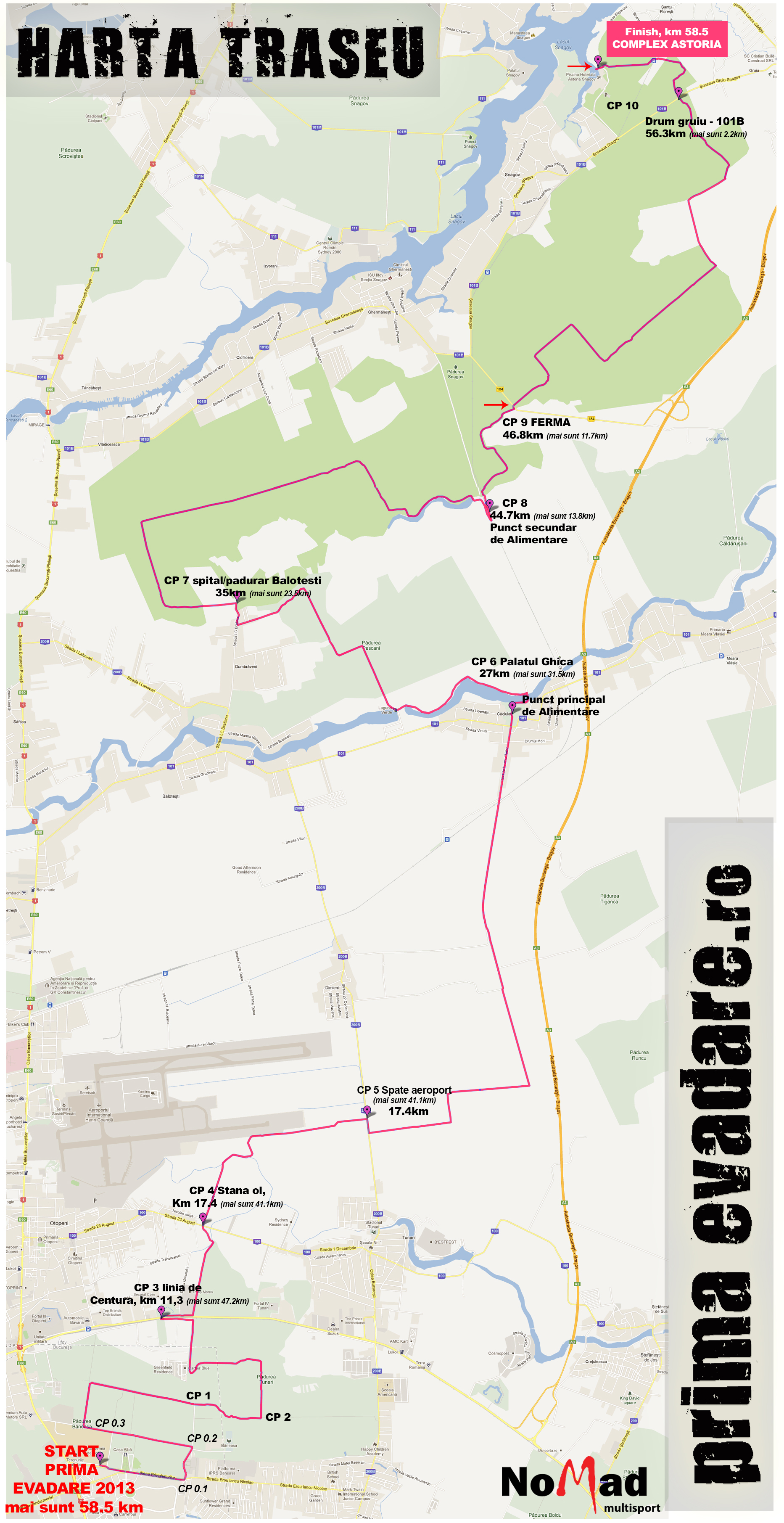 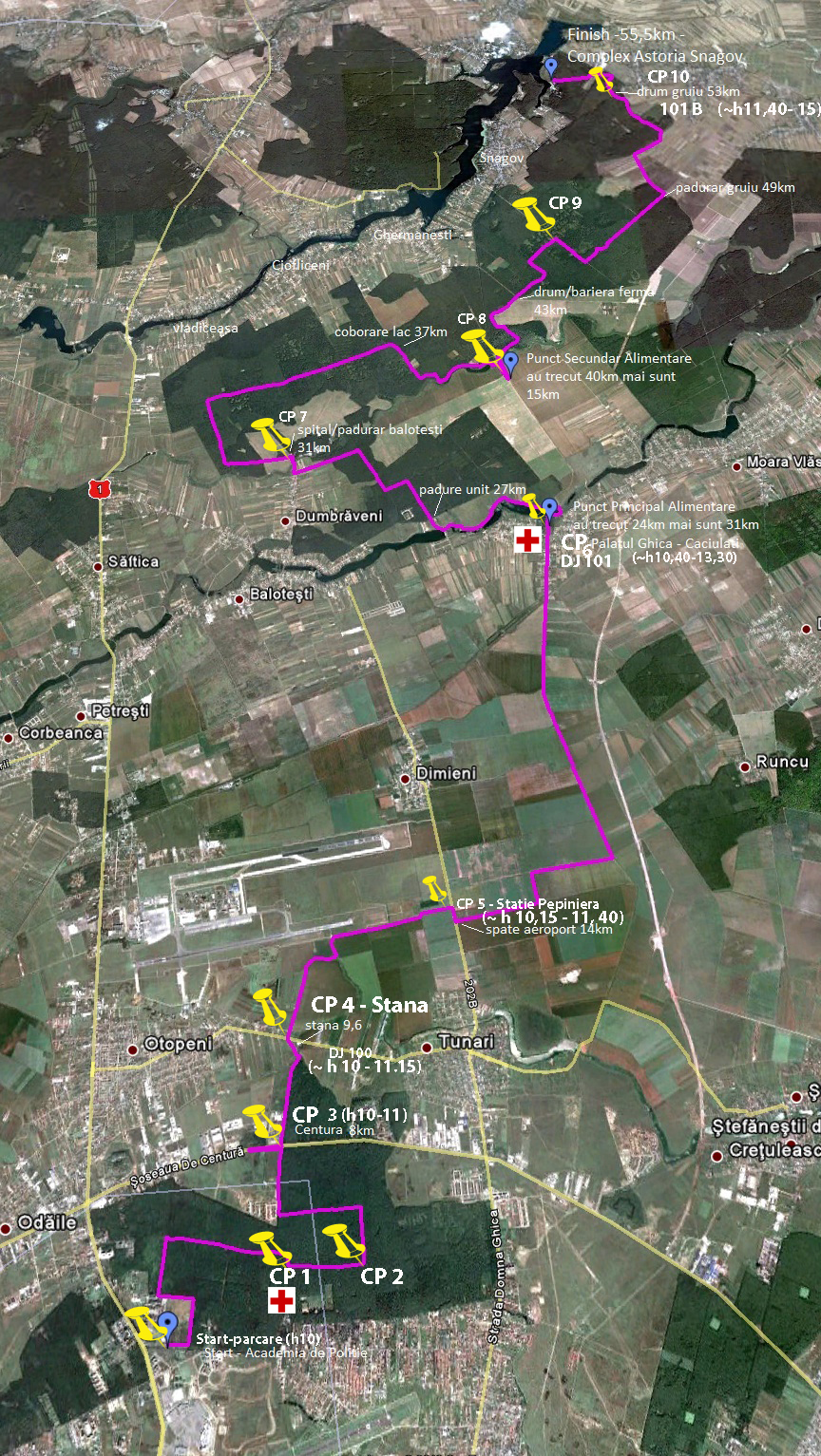 Variants back to avoid dn1

Baneasa trail marked with yellow arrows phosphorescent. (those for the first Escape are pink and in some places overlap) 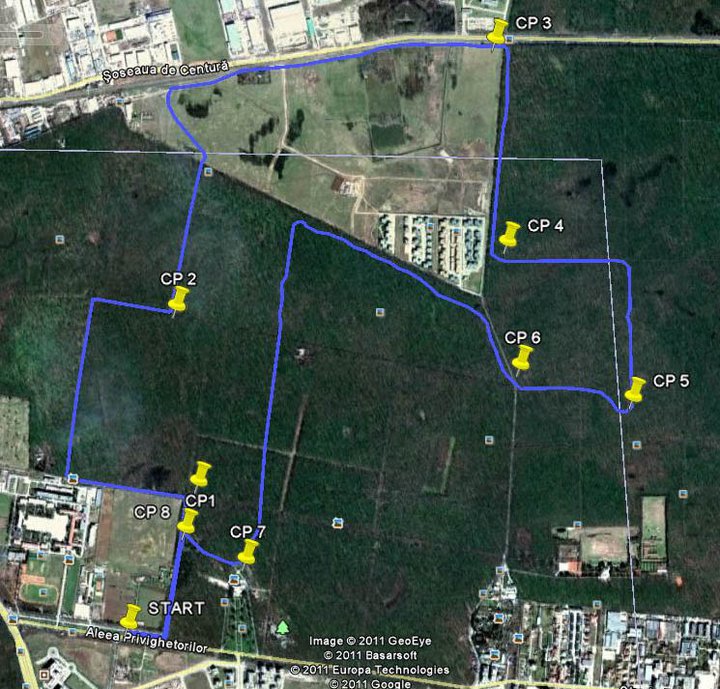